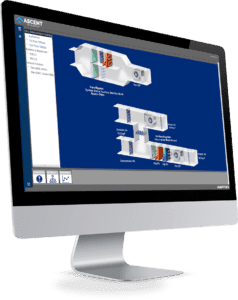 Leveraging mobile technology with building-automation systems boosts operator efficiency and maximizes system performance. By Kevin Callahan, Alerton Building automation systems with simple, schematic representations of equipment are easier to view on the smaller screens of mobile devices than are photo-realistic rendered images. In the not-so-distant past, building operators/engineers needing access to a building-automation system (BAS) were tethered to their desktop computers. As a result, servicing or adjusting a faulty unit (such as an air handler), required two people: one in the field to make adjustments to the troublesome equipment and one at the BAS to monitor the status. They then had to call one another back and forth to confirm equipment adjustments and outcomes. With mobile technology, building operators/engineers can now access BASs from anywhere in the world with an internet connection. This makes it possible for a person in the field, working on a malfunctioning unit, to immediately see the outcome in the BAS. By untethering from the desk top, building professionals now can accomplish more tasks during their shifts: instead of having two people work on one thing, two people can work on two things. This freedom was made possible by wireless networking and communications, including cellular and Wi-Fi technologies. Some BASs use HTML5, which now delivers complete user management of trend logs, alarms, and schedules, without the hassle and potential compatibility problems involved with third-party plug-ins. As a result, facility professionals can monitor and control building systems from tablets, smartphones, or any internet-enabled device, including their desktop computer. While connecting to a BAS by cellphone is possible, most operating personnel prefer a tablet computer because the cellphone screen is too small for many BAS applications. However, the ability to customize the BAS interface to fit the smartphone form factor is in the future. Viewing the small screen To help enable better viewing on tablet and cellphone screens, some BAS developers are streamlining and removing visual clutter from the graphical user interface. This is in contrast to the trend for several years of rendering graphical representations of building systems that looked like the real thing, but ended up being distracting. While a photo-realistic image of a cooling tower or other equipment might have a certain gee-whiz appeal, many building professionals complained that such detail was unnecessary. For example, I often heard feedback such as, “we don’t need to see which side of the cooling tower the steps are on, we just need to be able to recognize the unit and see at a glance if it is on and operating within specs.” Although many BAS offer connectivity to the operating software through the system’s wall units, the functionality typically is limited to controls such as temperature overrides. But, with a tablet, field personnel have full access to the BAS through a browser. This enables them to accomplish wide ranging tasks, including commissioning, start-up, and troubleshooting of various building systems in the field. One vocal advocate of mobile-enabled BAS is Dominick, a 30-yr. veteran of the building industry who manages a 25-story building in Manhattan. He notes that mobile access makes his day-to-day work easier and more efficient because he has access to the system from anywhere in the building, from his home, or even while sitting in a meeting (just don’t tell his boss). Another proponent of BAS and remote access capability is Darrell Smith, director of facilities and energy for Microsoft. In this video clip from NBC affiliate King 5 TV in Seattle, Smith discusses how his team manages energy consumption in the company’s 145 buildings in the Seattle metro area. Regarding the flexibility of managing energy remotely, Smith notes: “I can do it from my living room in my pajamas.” http://www.king5.com/story/tech/2015/02/25/microsoft-hvac/24028627/ Although remote access to building automation systems is still somewhat specialized, within a few years building-management professionals will expect it as a given in any BAS they install. Having untethered access to the system means building owners can provide their tenants with higher levels of service for a given number of building operators / engineers. Author Kevin Callahan is a product owner and evangelist for Alerton, Lynwood, Wa, a Honeywell business specializing in building automation systems. He has 39 years of experience in the building control technologies field, including control systems design and commissioning, facilities management and user training. Callahan can be contacted at kevin.callahan@honeywell.com.

In this one-hour course, we will discover the strengths and advantages of FEVE fluoropolymer topcoats.

In this one-hour course, we will discover the strengths and advantages of FEVE fluoropolymer topcoats.