February 05, 2018 - by commarchtest Send this article to a friend 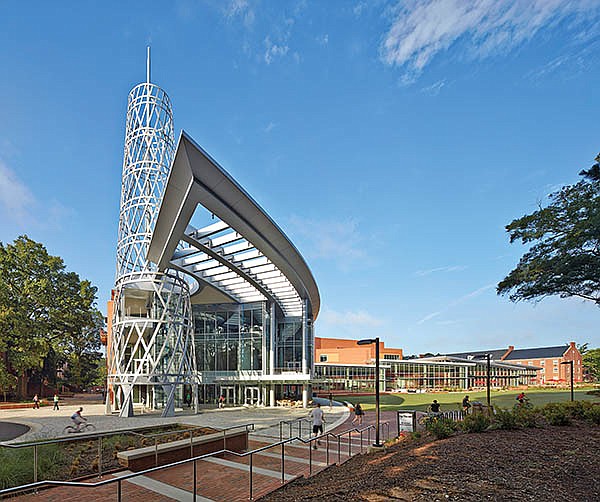 Student centers have taken on an increasingly important role in campus life.

The design of NC State’s Talley Student Union transforms a 1972 facility into an exciting, interactive, and interdisciplinary hub for student-life experiences and the entire campus community. The iconic Technology Tower—inspired by research at the university—marks the location of a future pedestrian bridge to North Campus. All photos: Robert Benson Photography, courtesy Duda|Paine By Kenneth W. Betz, Senior Editor Student unions are not entirely new structures on university campuses, but their purpose and design have evolved with changing student demographics and educational goals. Student unions as a building type began being constructed on university campuses during the late 1950s into the early 1970s. Before that, student social spaces might have been the lobby or hallways of administrative or academic buildings or, for larger gatherings, in auditoriums and recreation centers, according to Jay Smith, AIA, LEED AP, principal and design director, Duda|Paine, Durham, NC (dudapaine.com). Those original student-center buildings are now reaching the end of their life span, he observed. “These facilities are becoming functionally obsolete from the standpoint of servicing, infrastructure, technology, and building-envelop functionality. Historically, their internally focused planning and programming fails to address current student social, academic, and professional needs.” Expansions of many existing student unions have occurred from the 1970s into the early 2000s, often resulting in conglomerate buildings that accommodated incremental growth but are at odds with a campus’ design and the evolution of university-life programs.

The architecture of Talley Student Union reinforces pedestrian circulation through strong visual links to surrounding buildings and to previously disconnected areas of campus. Each corner provides a prominent landmark, orienting students and visitors to interior spaces. “Student unions now serve as a university’s crossroads to connect the entire campus and its community in a tangible and direct way,” Smith said. “These buildings reinforce and enhance existing campus connections, spirit, and character, but also become transformative for their institutions. Student unions should provide campus social hubs and be extroverted; they must create a dialogue between inside and outside spaces that facilitate large gatherings and events, present diverse dining opportunities, and welcome people inside by showcasing active program and lounge spaces. Students want a place to connect socially, but also provide resources for academic and career success. To achieve this, student unions now house a great variety of social spaces, from small-scale quiet nooks to large, flexible meeting and conference rooms.” Today’s student unions serve future students and alumni in addition to current students. They are often the origin point for campus tours for prospective students, new student orientations, convocations, and alumni events. Benchmarking of comparable institutions provides insights into important programmatic components, contemporary building character, and architectural expression. Ultimately any renovation or new building serves the current student population, but also must facilitate competitive recruitment, support student retention, and ensure alumni support, Smith commented. According to Smith, the success of student unions relies on establishing connections to other campus academic, recreation, housing, and dining facilities. In addition, the variety and character of student amenities within the building have been evolving, and student expectations of available features and comforts have continued to escalate. “In recent years, students and universities have expressed a high level of expectation about student-center design, which is a wonderful thing for architects,” he said.

Student unions such as Talley should provide campus social hubs and be extroverted; they must create a dialogue between inside and outside spaces that facilitate large gatherings and events, present diverse dining opportunities, and welcome people inside.

Student unions benefit the university as well as the students. “In addition to reinforcing campus cohesiveness, student unions enhance and promote a university’s character and brand,” Smith said. “Institutions directly benefit from current student satisfaction, new student recruitment and retention, alumni involvement, and increased opportunities to connect with the public. Program elements are strategic and include ballrooms and theaters that host campus and public events, multiple retail venues that generate revenue for the campus, diverse dining options, and traditional bookstore components.” Student unions are primarily for students, but a variety of other constituents have input, according to Smith, “Most student unions are funded from student fees, which are separate from academic funding sources. Students, student-organization representatives, student senators, administration from student affairs, cultural curators, and dining and bookstore constituents are the primary voices in determining a facility’s programmatic makeup. Students serve as ambassadors, who convey the spirit of the building’s program and design,” he said.

A wood feature wall at Talley Student Union honors the university mascot, a wolf. Academics still play a role. “Many scholarly events are held in student centers,” Smith noted, “and students use these buildings as alternatives to the library for work and study. In fact, collaborative spaces within student organization suites, flexible meeting rooms, and a mix of quiet lounge spaces are where academics intermix with the social aspects of student life. Other key program drivers include entertainment, relaxation, and socialization opportunities; the incorporation of technology; and openness and visual transparency to other internal spaces and the outdoors. These features come together to shape buildings that are inviting to students and mark the evolving functionality of the building type. With advancements in technology such as interactive meeting and scheduling systems, digital resources and wi-fi infrastructure, we see a more fundamental level of human interaction as equally essential. We’re designing buildings that perform, that meet their programmatic needs, but also provide a variety of spaces for critical interaction between individuals and larger groups.”

Technology is ubiquitous on university campuses today, and student unions have been influenced on many fronts with regards to technology and social media. Social media is used to promote and advance student support on referendums that fund building projects, advertise significant events and gatherings, and celebrate milestones in the design and construction process. Surveys distributed through social media have influenced dining choices, student lounge and meeting room sizes, and retail options, Smith commented. “Technology has also significantly impacted transportation access,” he said. “It’s no longer necessary for students to stand for long times waiting for shuttles in a specific area. Instead, many campuses have incorporated tracking programs and apps available on screens in the building or on student’s phones, so students are notified when their transportation will arrive. Gaming is another area that is transforming the way traditional ‘game rooms’ operate and are positioned within buildings. Gaming is now incorporated into lounges that are front and center, so students can watch or participate in groups. To accommodate this, the edges of games rooms are more open and widely dispersed. The efficiency of meeting spaces has also been significantly impacted by technology that allows groups to reserve spaces and to collaborate and present material in new ways.” Technology is not just about social media and gaming, however. “Building functionality and sustainability have also been greatly influenced and made possible by new technologies. Systems track composting and recycling, building energy, and water usage and make this information more accessible. There is a greater expectation that student-union design incorporates green roofs and other sustainable elements. This expectancy is good for everyone,” Smith said. Features unheard of in student unions just a few years ago are being introduced. “We are also seeing spaces traditionally part of student unions incorporated into other student facilities such as student health centers and academic buildings,” Smith said.

In addition to reinforcing campus cohesiveness, Talley enhances and promotes the university’s character and brand. Institutions directly benefit from current student satisfaction, new-student recruitment and retention, alumni involvement, and increased opportunities to connect with the public. “Some additional, or more specific, elements include coffee bars; climbing walls; bowling alleys; many types of traditional gaming features such as billiards, pool, and ping pong tables; scores of high-def televisions; resource centers that offer student services for international, LGBTQ, religious, and other groups that make up the diverse populations of universities today; student newspaper, TV, and radio station offices; black box theatres; indoor and outdoor cinemas; fitness center/exercise rooms; interfaith prayer rooms; and spaces or elements to honor the university mascot, such as the wood feature wall we did at NC State’s Talley Student Union of their Wolf,” he added. Student unions serve students who reside on campus but are also a resource for those who commute. “Most of our experiences are with universities where the majority of students reside on campus,” Smith said, “but these institutions generally also have a significant commuter population. For students who live on campus, the student union serves as a campus social hub and provides space outside of their dorm rooms to meet or study. Student unions are often open for extended hours and thereby serve as an alternative to the socializing that in the past might have occurred via a local bar scene. Commuter students use student unions as a ‘home away from home,’ especially when they have classes spaced out during the day. All students use these buildings between classes and are using them more and more as meal plans accommodate alternative food choices, which are typically located in unions as opposed to the typical dining halls. Today’s student union is a destination, where students often spend extended periods of time on their own, with a study group, or simply surrounded by their friends,” he said.

The Talley Student Union serves as a campus social hub and provides space outside of dorm rooms to meet or study. Student unions are often open for extended hours and thereby serve as an alternative to the socializing that in the past might have occurred in a local bar scene.

Talley’s design transforms a 1972 facility into an exciting, interactive, and interdisciplinary hub for student-life experiences and the entire campus community. The reconfigured building advances a new model for student centers through landmark form and an emphasis on shared and flexible spaces. The result is a welcoming, interactive, and interdisciplinary hub for the entire campus community, according to Duda|Paine Architects’ website (dudapaine.com). The architecture reinforces pedestrian circulation through strong visual links to surrounding buildings and to previously disconnected areas of campus. Each corner provides a prominent landmark, orienting students and visitors to interior spaces. The iconic Technology Tower—inspired by research at the university—marks the location of a future pedestrian bridge to North Campus. The reconfigured building is open and dynamic, redefining NC State’s campus identity and advancing a new model for student-life facilities with an emphasis on shared and flexible spaces. Key amenities include diversified dining, centralized student organizations, and integrated exterior/interior environments. Among other awards, the project received the 2016 Association of College Unions International (ACUI) Facility Design Award.

Talley has been designated as a Leadership in Energy and Environmental Design (LEED) certified building at the Silver level. Sustainable features of the building include: Talley is the fourteenth university building since 2011 to earn LEED certification, bringing the total amount of LEED-certified space on campus to more than 900,000 sq. ft. Click here to read the Ken's View column for February 2018. 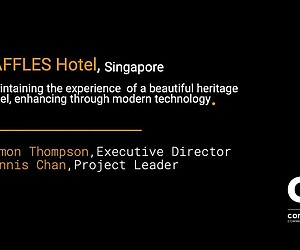