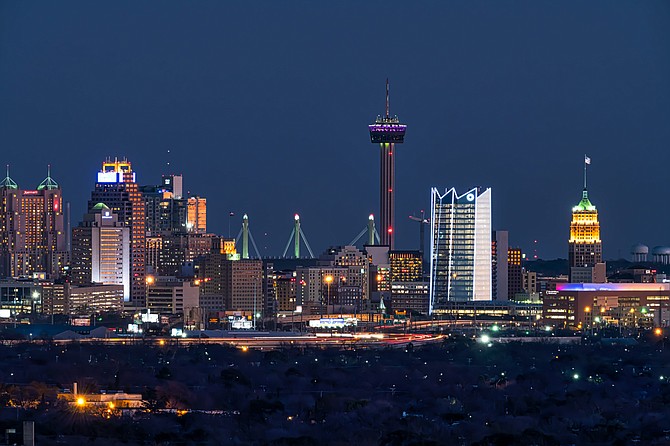 The first major building addition in San Antonio in the last 25 years has drastically changed the city’s skyline with the recent addition of the Frost Tower, a 24-floor, 460,000 square foot class A++ office and retail space on West Houston Street. Designed by world renowned international architecture firm Pelli Clarke Pelli working with architect of record Kendall/Heaton Associates from Houston, the Tower has boosted San Antonio’s upscale office space by 31 percent to almost 2 million square feet, and literally changed the nighttime skyline thanks to Acclaim Lighting. With its stunning architecture, Frost Tower’s glass-faced structure reaches high into the sky, with blades at the top that shoot upward like a crown. Developed by Weston Urban and KDC through a private-public partnership that includes Frost Bank and the city of San Antonio, the building design is defined by glass and steel with sharp lines that stretch from the base to the rooftop. In fact, the building has 187,396 square feet of exterior glass supported by 2,000 tons of reinforcing steel and 20,000 cubic yards of concrete, surrounded by 11,000 square feet of outdoor park with event space.

As dramatic as the building’s architecture is during the day, Frost Bank and the city wanted Frost Tower to highlight the city’s skyline for residents and visitors to enjoy at night, as well as be a catalyst for further downtown redevelopment. Francesca Bettridge, Michael Hennes and Ji Young Lee, from Cline Bettridge Bernstein Lighting Design (CBBLD) worked with the architects, Brian Richardson and Juli Spiva, lighting controls manager and specification sales from 2M Lighting, Inc., the general contractor, Clark Construction, and the electric contractor Walker Engineering to collaborate on a unique lighting scheme to highlight the sharp lines in the building’s architecture from its base to the crown. “Since this is a prominent tower on the San Antonio skyline, the owners wanted the building to have an iconic appearance at night,” said Hennes, associate principal at CBBLD. “The all-glass tower is octagonal with projecting points at the eight corners, so our challenge was to find a way to highlight the form of the building that would read strongly and clearly at night.” The unique octagonal, faceted form of the tower required special consideration of detailing because of the angles. In addition, the team wanted the lighting to integrate into the building in a way that it would not feel applied onto the façade. “The facade on the Frost Tower presented a very unique situation and required extreme coordination with the architects, general contractor, electrical contractor and the wall manufacturer to ensure timely prefabrication of wall sections with the cable pre-installed,” said Richardson. “We did not want the lighting system to adversely affect the construction schedule, yet proper lighting to highlight the facility was essential to the project.”

Sharp Edges and Round Lens

The team studied numerous design options. The architects did not want to have an illuminated crown that would create a visual separation between the top and the rest of the tower. As a result, the final design made the full tower read as a whole with the lines of light tracing the vertical side and angled top edges to delineate the unique form of the building. Bettridge, principal at CBBLD, said, “One challenge was to ensure that the line of light would clearly be seen from different angles around the city, as a smooth line (not pixelated), while being bright enough and meeting budget requirements. The light also needed to color change to celebrate holidays and special events.” A full-scale mockup was performed using multiple manufacturers. After extensive research, Acclaim Lighting’s products were selected by the team as the best solution. The team recommended Flex Tube RGB from Acclaim Lighting, based in Los Angeles. Flex Tube RGB is a flexible, direct view LED strip that features a red, green and blue color changing output. With an IP68 rating for wet locations, Flex Tube RGB has a highly durable PVC body which is outdoor rated and impact resistant. Its PVC body enables the fixture to perform in temperature ranges from -40º F to 131º F for more than 50,000 hours, so it is well suited to the Texas heat. The project included a special fixture construction which incorporated a rounded bull nose design for a better peripheral visibility, detailing the rounded edges on the sharp corners. The weather tight fixture was built to length pieces using the modularity of a curtain wall system to establish a best fit for floor to floor assembly of fixtures. By incorporating a quick release fixture connection, this enabled minimal curtain wall puncture and an option for easy maintenance. “The viewing angle of the fixture with its rounded lens was an important part of the selection process to highlight the structure’s sharp edges,” said Richardson. “Acclaim Lighting also provided factory installed watertight connectors that made on-site installation easier, as well as ensuring long-term lighting performance.” The lighting system incorporated AL drivers to provide DMX/RDM from zero to 100 percent to easily create and change colors on the Frost Tower. The input control protocols include DMX, RDM, 0-10V and DALI. The drivers feature either a 12V or 24V DC output for maximum flexibility with front end control preferences. One AL driver was incorporated on each floor feeding eight fixtures with eight AL drivers in a rooftop room for the "crown" sections with unique DMX controls on each unit. Synchronized control tied the main building façade to the garage façade, where similar Acclaim lines of light were mounted behind glass panels. Recently completed, Frost Bank Tower has quickly become a symbol of downtown San Antonio’s vibrant future. Creating an impact that transformative projects in the urban core can have on the entire city, the structure is igniting the surrounding area with pedestrian activity and commerce, bolstering the burgeoning tech scene, and connecting seamlessly to the city’s San Pedro Creek area, which is currently undergoing restoration. Visitors are taking advantage of seating areas, restaurants, cafés, and shade from nearby trees, all contributing to the Frost Tower base’s feel as a lovely pavilion in the park, as well as enjoying the iconic nighttime skyline, which is a sign of a prosperous future for San Antonio. “We were pleased to hear how well the lighting of the building has been received, and how prominent yet elegant the lighting appears on the skyline,” said Bettridge.

Join Vitro for live Continuing Education opportunities throughout the month of October.

Vitro is offering several online Continuing Education (CE) opportunities for you throughout the month of October.