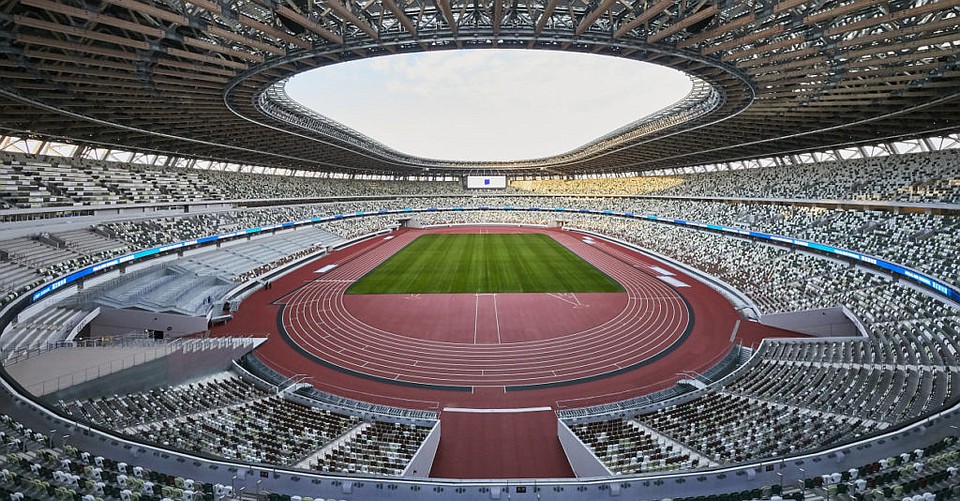 Due to COVID-19, the 2020 Summer Olympics in Japan will be postponed until next summer. Maybe. That is, if Japan can untangle a host of logistical problems.

For example, the Athlete's Village, where twenty-three new residential buildings have been constructed, already has tenants planning to move in after the games were supposed to conclude. Then there are the stadiums themselves. Many aren’t available next summer. The new National Stadium, which finished construction in November 2019, was built to host the opening and closing ceremonies. If the postponed Olympics don’t actually happen (they are the only Olympics in history to be postponed and not cancelled), then the structure will serve as a very nice 68,000 seat $1.4 billion arena football stadium.

Other venues built specifically for the Tokyo 2020 include the Oi Hockey Stadium, Tokyo Aquatics Center, Yumenshima Park, Ariake Arena, Kasai Rinkai Park, and Masashino Forest Sports Park. This does not include renovations to existing structures. All told, there’s been over $25 billion worth of structural preparation for this summer’s Olympics and companies have paid $3.1 billion to make these games the most heavily sponsored in history.

Even when the games do happen, and everything goes off without a hitch, international events such as the Olympics and the World Cup leave white elephants in their wake. These are crumbling megastructures, built with promises of sustained value once their intended events are over, but which inevitably succumb to the realities of steep maintenance costs and inadequate surrounding markets.

It’s a worldwide pattern, but Brazil has been notoriously burdened with half a dozen white elephants. The Estádio Nacional in the Brazilian capital of Brasília cost $900 million – when it was built it was the second most expensive soccer stadium in the world after Wembley Stadium in London. If you were to combine the attendance for all teams in the local Brasília league, you wouldn’t be able to fill the stadium once. The top club in Brasília, a fourth division team, now only plays in the stadium on special occasions. For almost a billion dollars, the Estádio Nacional is used as a parking lot for buses and an office space for government officials.

Rio de Janerio’s Maracanã Stadium, which hosted the opening and closing ceremonies for the 2016 Summer Olympics, fell into disrepair after the games left town. The field turned dry and brown, electronic equipment was stolen, and the power was shut off due to unpaid bills.

So what are the solutions?

South Korea’s PyeongChang Stadium, built for the 2018 Winter Olympics for a cool $109 million, was demolished after being used only four times. The University of Michigan estimated the cost of use per hour to be $10 million. That’s one way to do it. Other facilities, in host cities such as Sochi, were designed to be deconstructed and have their materials recycled.

While redrafting Olympic structures as stadiums for local teams would seem an obvious solution for elephants in larger markets, what about those in cities and towns whose local teams don’t draw thousands of fans? Around the world, unused arenas offer tempting opportunities for adaptive reuse.

There’s a saying in architecture: the greenest building is one that is already built. Often, these elephants have great bones and were designed by top tier architects. Repurposing them to fill alternative community needs can at least help to justify exorbitant taxpayer investments.

Beijing’s National Aquatics Center, known as the “Water Cube,” held swimming, diving, and water polo events during the 2008 Summer Olympics and is where Michael Phelps won his 8 gold medals. Wrapped in a shimmering bubble design, the structure won the 2011 National Science & Technology Progress Award. After the games, management was turned over to the Beijing States Assets Co. who turned the structure into Asia’s largest waterpark. There are 13 waterslides, a lazy river, a wave pool, and a spa. The upper floor houses an auditorium, a theatre, several restaurants, bars, and a museum of Olympic history.

In Montreal, the velodrome/judo arena for the 1976 summer games was repurposed into the Montreal Biodome. The original structure, designed by French architect Roger Tallibrert, maintained its modern, space-age exterior while transforming the interior into a cross between a zoo and botanical garden. The biodome contains four separate ecosystems which house a large collection of diverse flora and fauna, including macaws, lynx and penguins.

When the 1940 Summer Olympics were cancelled due to the outbreak of World War II, Helsinki’s Tennispalatsi, or Tennis Palace, had already been renovated to accommodate the event. Originally designed by architecture student Helge Lundström in 1937, the building was first a functionalist auto dealership, then a tennis hall, and then a basketball stadium when the Games returned to Helsinki in 1952. It deteriorated for decades thereafter, and there were proposals for demolition, until the Palace’s architectural and historical value was recognized in the early 1990s. Now, the Tennispalatsi is a cultural center, housing the Helsinki City Art Museum, a movie theater and several restaurants.

Then there are the atypical afterlives. Los Angeles’ Grand Olympic Auditorium from the 1932 Olympics is now a Korean Church. The Olympic Village from Lake Placid’s 1980 Winter Olympics is now a federal correctional facility, housing prisoners instead of athletes. Sarajevo’s Mezarje Stadion was turned into a literal graveyard.

Architects are problem solvers by nature and there is a constant flow of proposals to repurpose white elephants into something more useful. With a minimum amount of will and resources, they can be transformed into dynamic residential complexes, grand education facilities or emergency relief centers for natural disasters and pandemics.

For now, the Olympic flame will remain in Tokyo as a beacon of optimism for the postponed games. International Olympic Committee president Thomas Bach referred to the flame as “the light at the end of a dark tunnel” in which the world currently finds itself. Tokyo’s new National Stadium will most likely always have a tenant, however worthy, but let this situation be an example of the importance of practical planning for international events and their perennial coliseums.