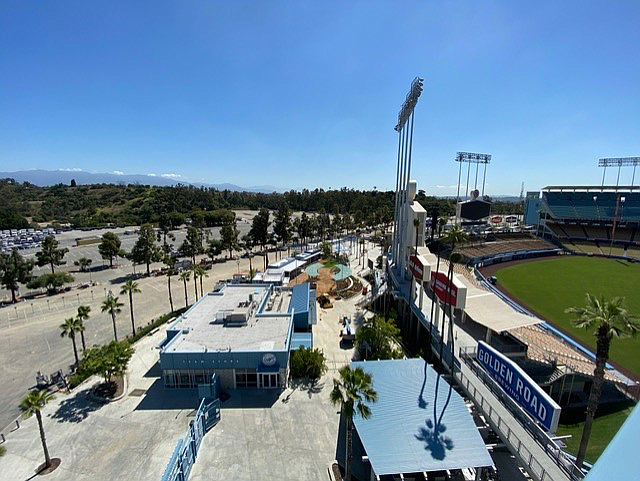 What was the goal of the design?

What does the new design feature?

“This 2021 season, the Los Angeles Dodgers debuts one of the most significant improvements, the Centerfield Plaza and renovation of the iconic outfield pavilions with their folded, corrugated 1962 roofs,” says Janet Marie Smith, Dodgers Executive Vice President, Planning & Development. “The landscape plazas are a crucial part of the additions that allow the Dodgers to offer new food and beverage options, retail stores, kids areas, and memorabilia that are found in newer facilities, while maintaining the original structure in a respectful manner.”

Smith adds that the landscape design and “new front door” to Dodger Stadium, featuring a sculpture of Jackie Robinson and designed by Studio-MLA, “are situated in a landscaped plaza reminiscent of the other lush plantings around Dodger Stadium’s berms.” Unlike any other U.S. sports venue, Dodger Stadium is carved into a hillside in its setting of Elysian Park. It is also the third oldest venue and the only one of the 30 Major League Baseball (MLB) ballparks constructed in the midcentury modern style popularized, appropriately, in Los Angeles in the 1950s and 1960s, she says. 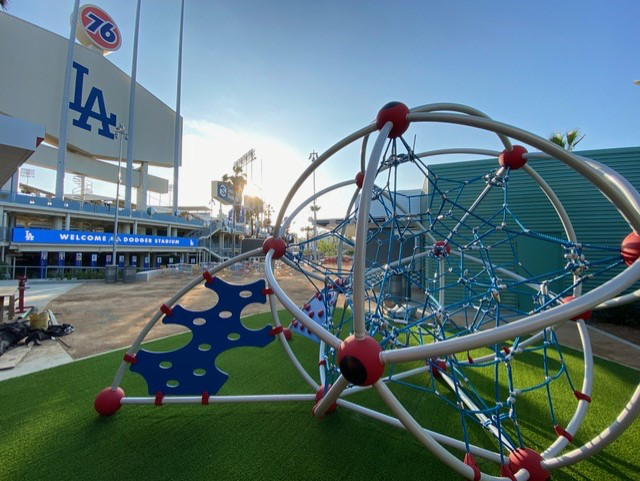 Image Credits: Studio-MLA
Significantly, the Dodgers chose a design team that specializes in cultural landmarks to overhaul their landmark building. The project was overseen by Smith, the Dodger executive renowned for her prior work on Oriole Park at Camden Yards and the renovation of the 1912 Fenway Park. The Downtown Los Angeles-based project architect, Levin & Associates Architects, has led historic preservation work at the Griffith Park Observatory and City Hall and is the author of the new centerfield buildings, which depart from the norm of building inside the stadium footprint. DAIQ Architects designed the pavilion renovations including the new homerun seats and the broad overlook at the top of the pavilions.

For its part, landscape architect Studio-MLA has worked on several historic sites including the John Anson Ford Theatres, Union Station, and Stanford University’s Frost Amphitheater. The firm has also provided urban design and landscape architecture for two other major sports venues in Southern California: the recently opened NFL SoFi Stadium at Hollywood Park, and the new Banc of California Stadium for soccer.

What is the significance of the renovation to the community?

Says Studio-MLA President Mia Lehrer, FASLA, “As Angelenos, our identity is so closely intertwined with Dodger Stadium and baseball, we are thrilled to work on this ballpark. It’s a seminal example of midcentury architecture, with views of downtown Los Angeles to the south and the San Gabriel Mountains to the north.”

“This is the most recent and largest phase of improvements ever for Dodger Stadium, featuring acres of new amenities and places for the fans to learn and enjoy,” adds Studio-MLA’s Principal Landscape Architect Michelle Sullivan, PLA, LEED AP. “The renovated landscape for the 260-acre site furthers the Dodgers’ goals of strengthening the fan experience and collective memory of the stadium, while also adding trees and planted slopes that enhance wayfinding, safety, and security throughout the site.”

Under the Guggenheim Partnership ownership and Stan Kasten, President and CEO, the Dodgers have invested more than $250 million to upgrade and renovate the stadium. “The combined design efforts allow the 60-year-old Dodger Stadium to retain its classic 1960s appearance while providing fans with experiences expected of new facilities,” says Matt Lysne, PLA, ASLA, the Project Landscape Architect who managed the Centerfield Plaza and various improvement projects around the stadium over the last six years.