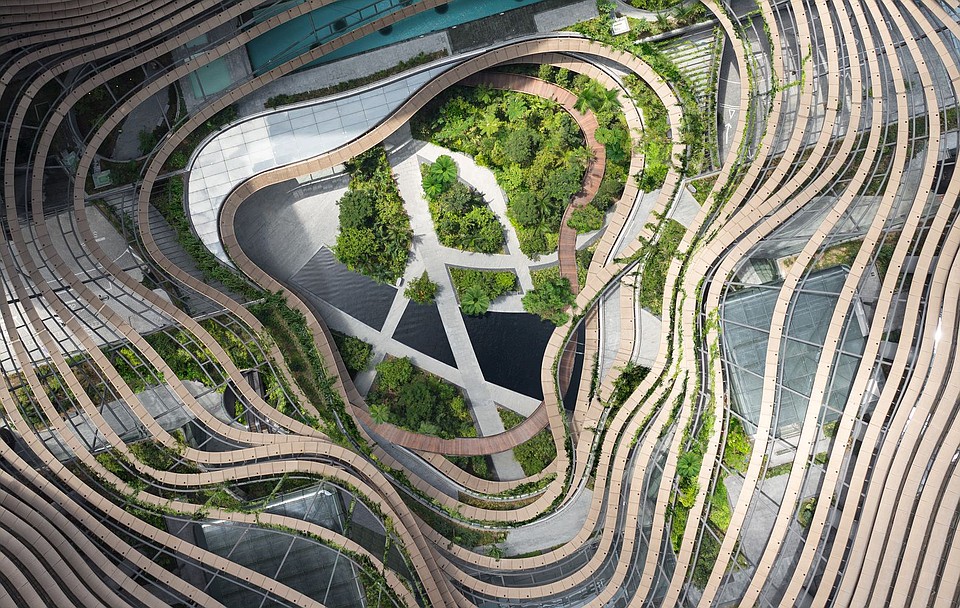 What will the future look like? We’ve all had our own daydreams on the subject, but few put more thought into its nooks and crannies than science fictionists and architects.

In season three of HBO’s Westworld, the android revolution has breached the perimeter of its titular theme park and is now navigating the mean streets of our future cities. The plot is pitch perfect science fiction and the show’s many set pieces are a world tour of visionary architecture.

“We wanted this to be a grounded futurism,” says Howard Cummings, Westworld’s Emmy-award winning production designer. “It’s what you would hope things would be, except that eventually you find out that it might just be on the surface.” 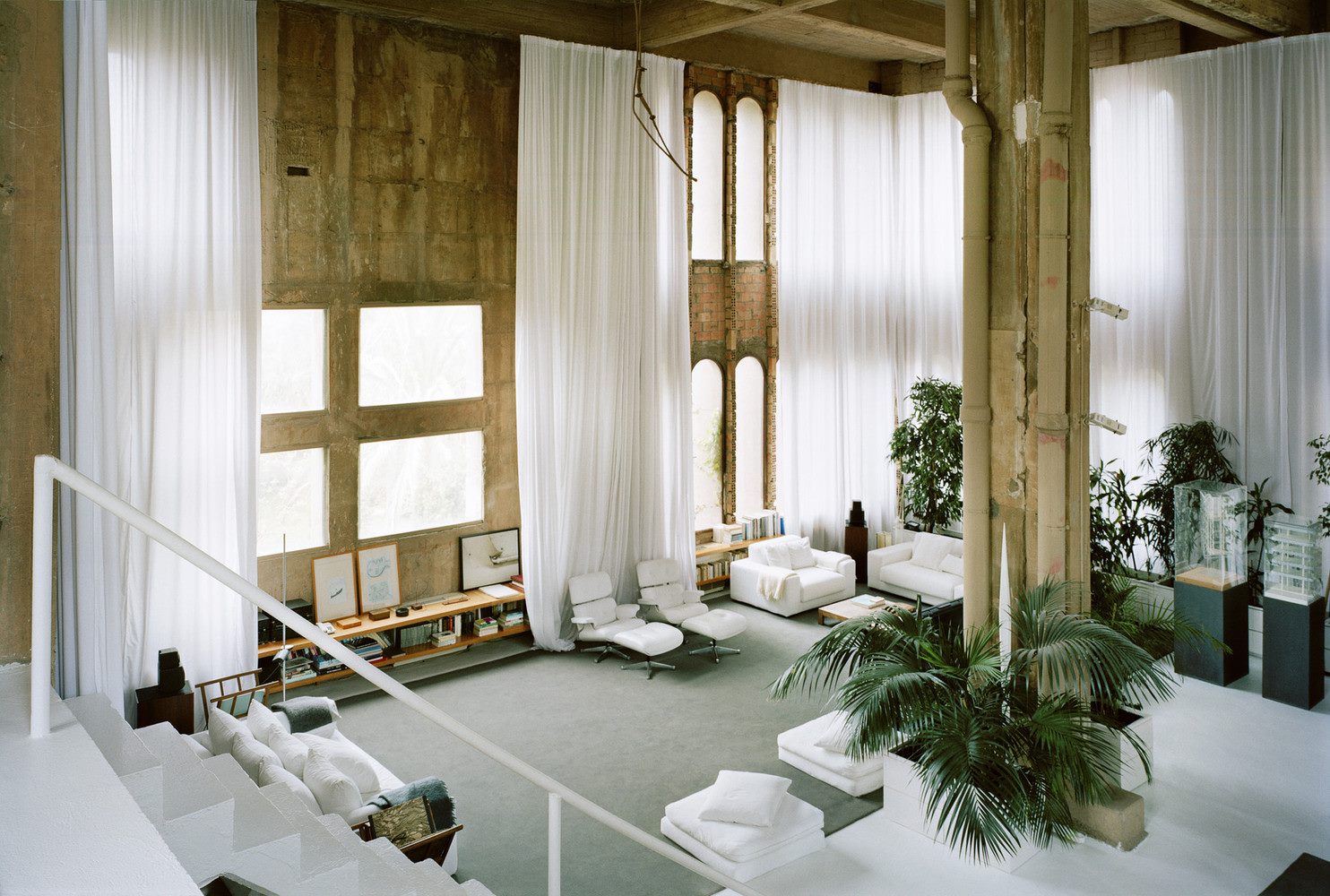 The show settled on a look that is practical and marvelous, but not so outrageous that it is unrecognizable. During establishing shots and Uber drone flyovers, the backdrop feels realistic because most of the buildings are real.

What isn’t part of an existing skyline is spliced with CGI renderings of fictional buildings. Like today, not everything is ultra-modern. From columns to cathedrals to colonial shophouses, we still see the bones of architecture’s past.

“Jonah Nolan, the co-creator of Westworld, wanted the city to look more advanced than it is now,” Cummings explains. “As though climate change had been eliminated through carbon-catching towers, which are sometimes visible throughout the show.”

Danish architect Bjarke Ingels reached out to Cummings about getting involved with the show and eventually met with the production team to learn how they world-build and design their sets. He became an informal consultant and even joined showrunner Jonathan Nolan on set scouting missions.

“When it came to designing futuristic buildings for the third season, Bjarke offered to help by giving us the digital models of a bunch of projects of his own firm that were never realized,” says Cummings. “If you look at some of the aerial shots, his buildings can be seen sprinkled throughout.” Most of the designs Bjarke provided were never constructed and were resting in peace as unrealized computer files until HBO made them scenery for one of its flagship shows, a dream come true for any architect.

But still, the structures providing the biggest wow factor in Westworld’s third season are all the real thing. Sourced from metropoles around the world, Westworld’s cast of buildings hint at the future’s potential with contemporary architectural masterpieces. In the background of corporate takeovers and high stakes inter-species espionage is a world tour of modern wonders.

Season three of Westworld was set in Los Angeles in the year 2058 and was filmed in 2019, the same year Blade Runner predicted the city of angels would become a steamy neon-soaked concrete hive. While both Blade Runner and Westworld focus on advanced androids, the latter imagined a future continued on trajectories in motion today. The utopian goals of biologists, engineers, and city planners have been realized but humanity’s surviving flaws persist. 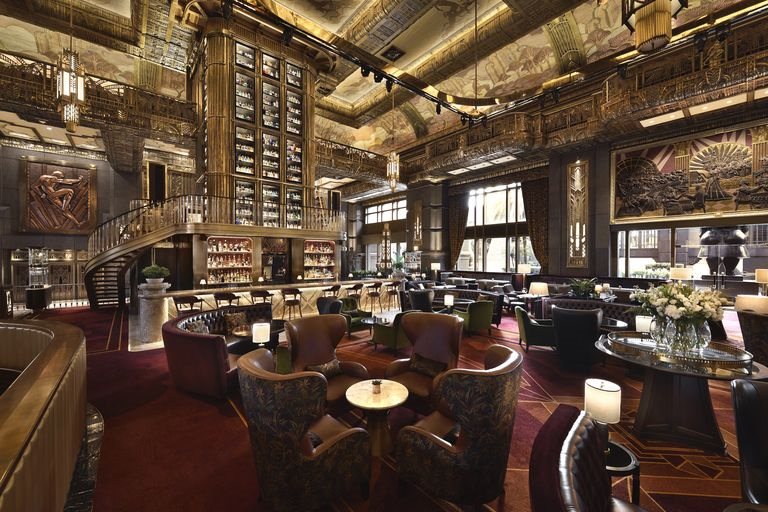 Image Credits: Ek Yap
“We would shut down sections of L.A. roadways to bring in planters, seating, and different types of green surfaces to make the city look a lot more green than it really is,” says Cummings. “We assembled a kit of roadway disguises that appear to accelerate the city’s current initiatives to become greener and more pedestrian-friendly. You may notice we also ‘completed’ the L.A. River project in some flyover shots, turning it into a fully functional river.”

Westworld averages 35 locations per episode, ranging from dusty saloons to shogun villages. One of the first glimpses we got of the “real world” outside of the robot-filled theme park was an executive’s home, set in Frank Lloyd Wright’s Millard House in Pasadena. Built with concrete shaped in wooden molds, this was the first of four “textile block” homes built by Wright in his experimentation with modular homes.

It’s a timeless design and looks like it could house anyone, from a medieval clergyman to millionaire programmer. “We felt that concrete provides a real atmosphere and texture to modern buildings,” says Cummings. “It can be formed into anything; it’s got incredible fluidity while still being foreboding.” In his autobiography, Wright said he chose concrete because it was "the cheapest (and ugliest) thing in the building world.” The cross patterns cut into the walls pair well with the show’s consistent themes of sacrifice, resurrection, and creation.

Showing off Los Angeles’ recent building boom, the show whizzes by The Broad Museum (by Diller Scofidio + Renfro, architects of the High Line in NYC) during a shootout. This 120,000 square foot art museum houses over 2,000 works of art and was built with a design concept known as “the veil and the vault.” The ‘vault’ is the concrete storage body at the core of the building and the ‘veil’ is the exterior made of 2,500 rhomboidal fiberglass panels and reinforced concrete supported by a 650-ton steel substructure. The panels make a porous honeycomb-like shell and is very similar to the milky skeleton of Westworld’s robotic hosts.

Spain’s architecture has always been ahead of its time, so it makes sense that many of its locations used for Westworld are not ultra-modern. In fact, its primary set piece is a decade old and the other was a remodel completed half a century ago. 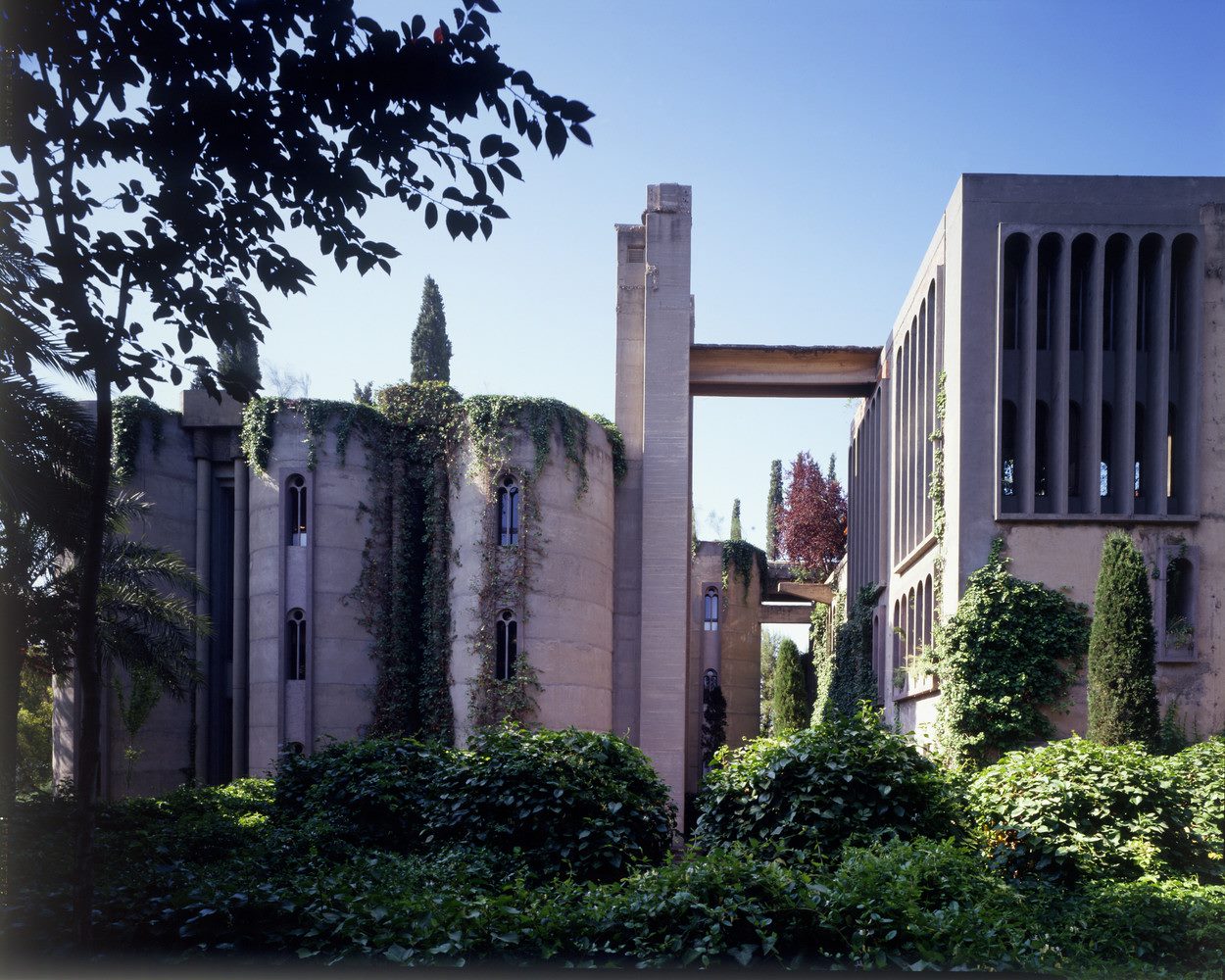 Image Credits: Ricardo Bofill
The City of Arts and Sciences in Valencia, designed by Santiago Calatrava, was completed in 2009 but still manages to look cutting edge. Home to Westworld’s promethean Delos Corporation, the city consists of an opera house, planetarium, IMAX theatre, science museum, and promenade. With its clean open-air spaces and white concrete framework, it’s easy to see why the showrunners picked the museum complex to act as a tech campus.

Inspired by Bronze Age grand exhibition pavilions, the longitudinal building’s pillars and pools make the grounds look like a futuristic temple to science, perfect for the offices of a robotics manufacturer who inadvertently births a new intelligent species. A continuous glass-and-steel curtain runs the building’s full length while the planetarium, which resembles a human eye, is set within a 24,000 square meter pool.

The ‘pupil’ is the theatre’s hemispherical dome and, when viewed from the pool’s opposite bank, appears as a globe in the water’s reflection. The overarching concrete socket incorporates an ‘eyelid’ of vertical articulated metal slats which can be raised and lowered. Like the crosses in Wright’s Millard House, the ‘eye’ motif appears many times during the season, symbolizing the all-seeing AI built to correct the self-destructive bug in humanity’s programming.

Even older than Calatrava’s City is Ricardo Bofill’s Factory (La Fábrica) in Barcelona. In the early 1970s, Bofill found an abandoned industrial complex and spent two years transforming it into the head office of his architecture firm, Taller de Arquitectura.

The factory was partially in ruins but to Bofill it was a playground filled with surreal elements such as stairs that climbed nowhere, reinforced concrete structures that sustained nothing, and random iron slabs hanging in the air. This landmark of the structuralist movement appears as a laboratory where a robot attempts to make a break for it before being gunned down by henchmen clad in black Kevlar.

Bjarke and Cummings met in Barcelona to scout the location. “The building was originally cement silos fabricated using poured concrete. Bofill added some touches that included gothic-style archways; his work of the 1970s was so postmodern, and to me it was a weirdly timeless design that for me was the opposite of the Westworld labs which are all black and glass.”

In the third episode of Westworld season three, two characters find themselves in the Atlas Bar, throne room of downtown Singapore’s art deco Park View building. Behind the bar, a twenty-six-foot-tall golden tower houses one of the world’s largest collections of gin. Years ago, waitresses dressed as fairies would fly via wire mechanism to fetch bottles from the upper echelon of the tower. The seating area is all red carpet and booths with industrial-era leather sofas; the sort of place you might find Ayn Rand and Jay Gatsby arm-in-arm getting snockered off the ol’ giggle water. 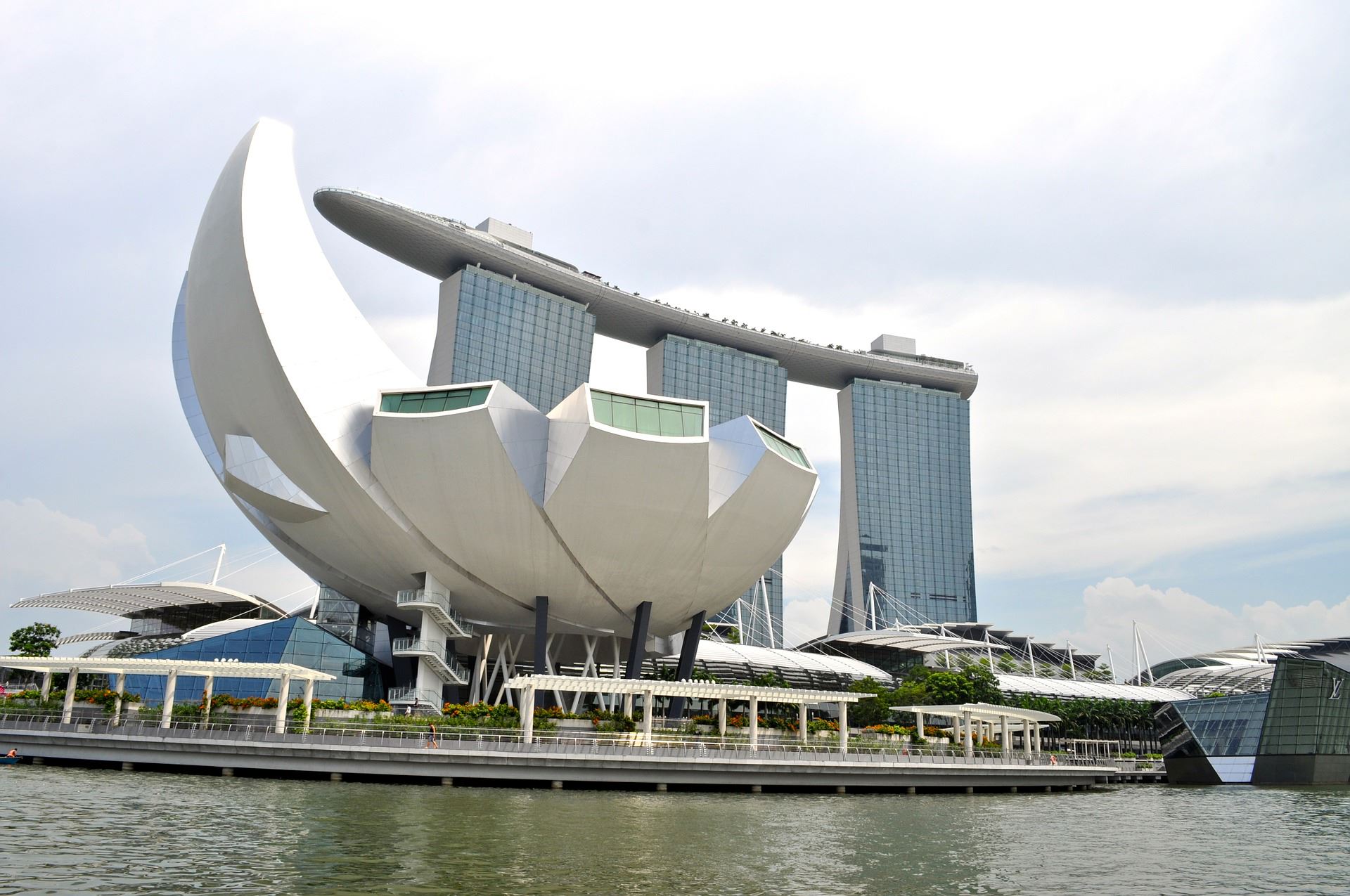 Image Credits: Pixabay
The character Maeve, who has recently escaped from a virtual simulation and was brought into the real world, remarks on the posh setting. “Another simulation? It’s a bit over the top.”

“No, Maeve,” replies her host, “This is Singapore.”

Singapore’s over-the-top forward-looking architecture was the main inspiration for Westworld’s future. “Its vertical greenery provided the look we were going for,” says Cummings. The increasing greenification of Singapore’s urban jungle is due to a government mandated masterplan to balance its rapid development with care for the environment. The show’s first episode uses the lush Parkroyal on Pickering and the vine-covered Oasia Hotel as examples of this optimistic view of the future. Again, it’s a far cry from the crowded black towers of Blade Runner and shows Westworld’s idyllic cinematography, restricting all dystopic pessimism to the plot.

Caleb, played by Aaron Paul, awakes with the famous Pinnacle @ Duxton looming in the background outside his bedroom window. The Pinnacle is the world’s tallest public residential structure and appears here as an ominous reminder that class is still a thing in the future. On the phone with his friend Francis, played by Scott Mescudi aka Kid Cudi, Caleb meanders across Singapore’s Helix Bridge, a 280-meter-long architectural representation of a DNA strand.

Westworld’s establishing shots are essentially tourism ads promoting Singapore’s architecture. We see the Marina Bay Sands Hotel and Casino whose boat-based design defines the downtown harbor skyline. Across the bay, characters visit the durian-shaped Esplanade whose spiky shell is dotted with small lights that twinkle in the night. The spikes, which are actually triangular aluminum sunshades, are designed to direct sunlight within its interior concert hall and theatre while also keeping out the heat.

A major set piece is the Marina One complex, created by Ingenhoven Architects and A61, to exemplify Singapore’s “City in a Garden” aesthetic. The design unifies four land parcels into one architectural network surrounding an interior garden, dubbed the Green Heart. The iconic louvres flow between the buildings to create an integrated environment based on Asian rice terraces. It’s the largest interior green space in downtown Singapore and creates an idyllic setting…until the robot revolution arrives and bombs start going off.

Westworld is not the first production to use existing cities as futuristic settings; the showrunners have said they were inspired by Spike Jonze’s Her which used Hong Kong to represent Los Angeles. Still, the show traveled the world in search of structures linked by inherent themes and gathered them in one place for us to enjoy. Referencing the shoots in Singapore, Spain, and Los Angeles, Cummings jokes, “This year was really a global endeavor. I didn’t actually sleep very much.”