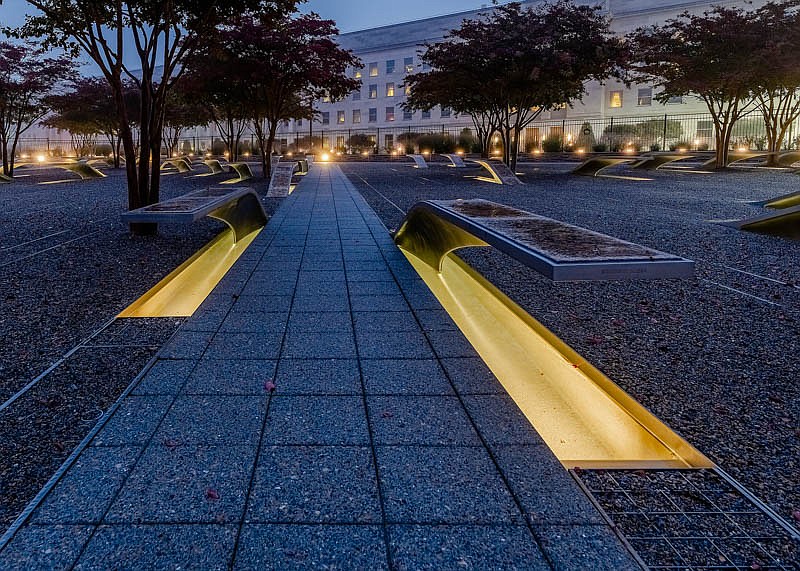 Project Background
The National 9/11 Pentagon Memorial is dedicated to the tragic events of September 11, 2001. Adjacent to the Pentagon, the two-acre Memorial Park is a powerful tribute. Each of the lives lost on American Airlines Flight 77, and military and civilian personnel inside the Pentagon is represented with a bench. The benches seem to rise from individual rectangular pools under each one, and with trees interspersed amongst them throughout the park, it makes for a fittingly calming environment. 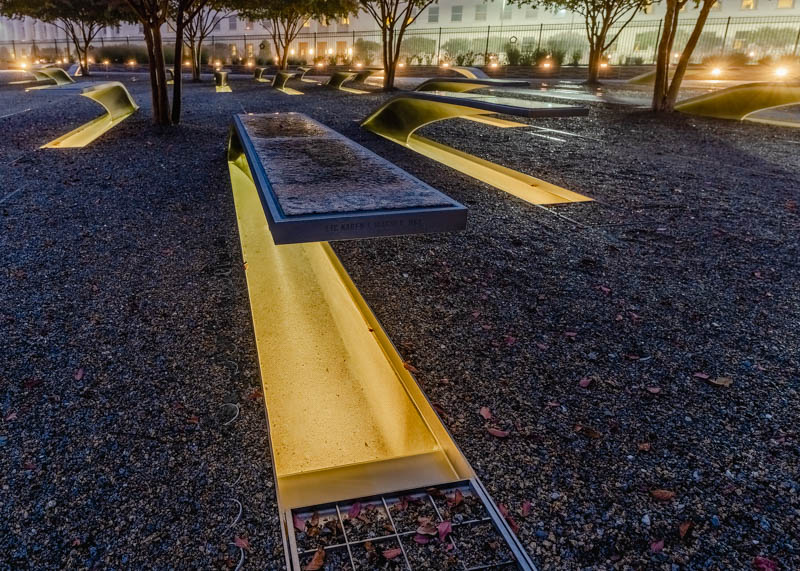 In the evening, the benches are illuminated from below by lighting installed within each pool providing a striking visual effect while clearly identifying each bench location.

What was the challenge?
When the park first opened the pool lighting fixtures were HID. According to Giovanni Santoro, project manager at Aarow Electrical Solutions, water had been infiltrating the fixtures, causing lighting failures in recent years. A lighting retrofit was required to make sure the memorials were appropriately illuminated in a safe, low maintenance and energy efficient way.

What was the solution?
"Due to the sensitivity of the site as a national memorial, the solution had to ensure minimal disturbance to the site and respect the memorial design elements," said Santoro.

Aarow collaborated with Federated Lighting and Graybar to develop the new lighting specifications and selected Hydrel's 4426 LED fountain and reflecting pool luminaire for the project.

With a medium flood distribution, light coverage of the entire underside of the benches is achieved. And a frosted lens softens and evenly spreads the 3000K light. As a result, the luminaire emits a warm illumination that allows the individual Memorial Unit pools to glow; an effect that is both welcoming and soothing for park visitors. 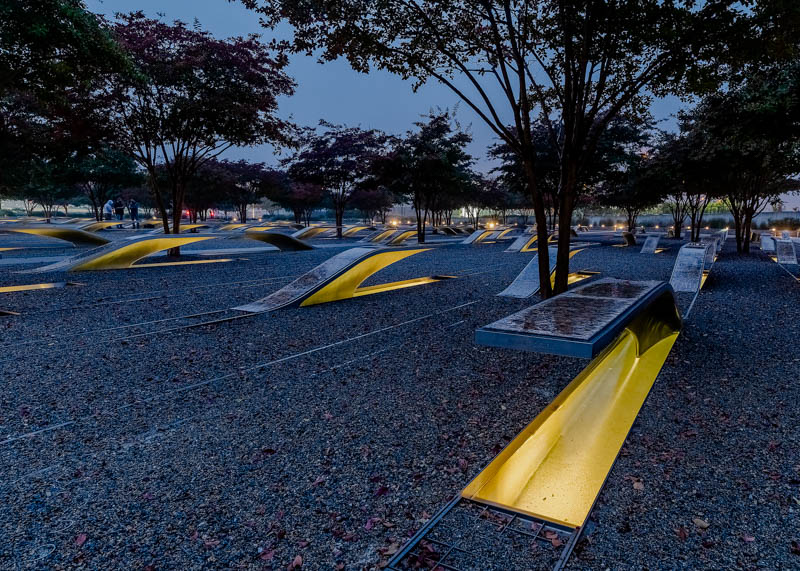 Photography Credit: Pete Albert
“All of the new conduits to the benches are directionally-bored to each unit, which prevented the disturbance of the entire memorial grounds,” Santoro said.

One of Aarow’s requests for the design was to collect all drivers into one electrical closet, burying it in a minimally invasive housing below ground. The drivers would therefore be in a more secure location away from the pool fixtures themselves.

"The opportunity to use a submersible, remote driver, meant we could save space within the lighting compartment itself," said Santoro. “The LED fountain lighting solution was built to work within this limited space and stand up to the harsh environment within the enclosure.”

Hydrel engineers worked on-site to determine an appropriate location for the remote drivers. A distance of 200 feet from the fixtures was tested and approved for the electrical closet.

For ease of installation, and to minimize the size of the buried closet, Aarow also challenged the Hydrel team to power multiple luminaires from a single driver. Engineers were able to assign two luminaires per driver, reducing the total driver count to 92.

Hydrel’s engineers then devised a unique solution to ensure this set-up met the technical standards for the project. Each driver was encapsulated in Hydrel’s propriety epoxy blend, and then affixed with custom brackets to facilitate mounting in the electrical closet. The encapsulated driver module attained an IP67 rating and CSA approval.

What were the results?
The final result is a beautiful, soothing landscape: pools of warm light that illuminate the memorial benches and provide a somber yet comforting tribute to the 9/11 Pentagon victims.